Over the years , tika-taka whether by barca or the Spanish national team , has bored me to levels unimaginable . So much short passing that in the final analysis , that graphic of passes completed looks like a board scratched with chalk by a mischievous young kid .It’s a simple game . They pass the ball around , draw the opposition midfield out of position and their midfield maestros find a pass straight to their forward , who has the monotonous job of kicking the ball past the keeper . It’s a challenge playing that way and both these teams deserve credit for playing that way no matter what the situation . To stick to your philosophy in any situation is commendable . But that strength is perhaps their greatest weakness . The incapacity to adapt . The reluctance to change . The inflexibility within .
Both barca and Spain are dependent ,heavily ,on xavi and inesta for those lovely throughballs . Barca have messi to finish the move off while Spain have quality in Torres and villa and the like for the same .

Xavi has been way below his mark in the euros and del bosque’s not-so-brilliant idea of playing fabregas in a striker-like position hasn’t exactly fired . The fact that Torres has scored two goals makes it quite a no brainer to play him upfront . They play a formation and have a philosophy that demands it . For without a proper striker , tiki taka is nothing more than an exaggerated passing training session .
But their incapacity to change means that they can do little more than that . The very thought of tweaking the game a little must give vincent del bosque nightmares . And maybe that’s why someone at barca came up with that brilliant idea of making possession the basis on which games are decided. Not goals .
Tiki taka took everyone by surprise when it came on the scene . The amount of success it brought barca made other teams want to do it themselves. None succeeded . And thank god for that . We still have competitive football in the world thanks to that failure .
Tiki taka got a pedestal of its own as the ultimate form of playing the game . You could be invincible playing it . You’re dead rubber playing against it .
Happily , that’s a perception that’s changing . Teams have found ways around it . Desperate yet organised defending , quick counters , deadeye man marking . Sounds simple but things that will beat tiki taka .
For Italy , it shouldn’t be a problem . Super Mario will have to do some tough tackling in midfield and shake up that Spanish defense and pirlo probably for one last time in the Italian blue in a major tournament , will need to sparkle .
As for Spain , they’re predictable as ever . The only doubt remains if they’ll play a striker or not and for the sake of the entertainment factor in the game I hope they do .
Italy need to do something that takes Spain out of their comfort zone . Either defend to the death or attack to the death . Or possibly do both .

I’ll end this post with a wish. That tonight , football will win . That Italy will prevail over tiki taka . That for tiki taka it will remain a year when it won nothing . Not at the club level . Not at the national stage . And that for all this to happen , ballotelli doesn’t get himself sent off ! 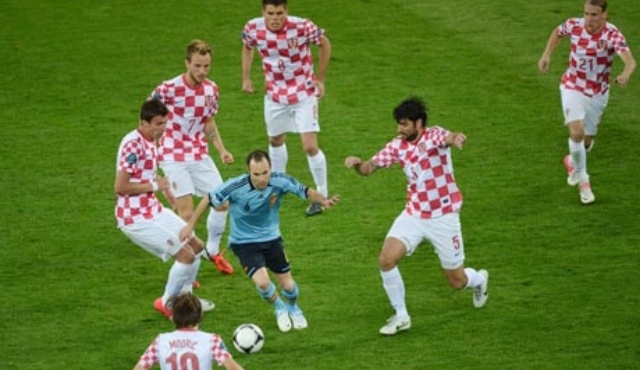