Skip to content
As the guest writer articles begin to come in slowly, this is one sent in by Roo, on the head first plunge into quicksand that architecture students take.


23.33
That’s the time it hits you that the amount of work you’ve done is not enough.
As architecture students, you’d think that we’d be used to sem end vivas. M’afraid not.
This is the trauma our minds block, which only leads to cluelessness on how to proceed, when we reach the same point next year.
And the trauma recurs again.
This endless cycle is supposed to prepare you to deal with future clients I suppose, though I barely see how.
Clients can be begged for extension of time.
They can be subdued.
They don’t hold my future with them.
I’d much rather not work than panic work.
Sometimes I wonder if the famous ones lose their minds as much as we do with their workload.
But then I suppose it’s their interns I should be referring to.
Unless we become the best, the most sought after, I’m afraid there’s no hope to this endless misery.
If anyone is taking this course because they think its easier than the engineering counterpart, I seriously advise you to think again.

It’ll make you swear and cuss, not that you don’t already, so that’s not all that bad.

•Forget the outside world. Yes, you might get to go out once in a while, or twice, but apart from that, get ready to look like the Dracula kind, minus the blood drinking.

•Lose all rationality. If you start talking like hodor after two semesters in, hodor hodor hodor!(read:don’t blame me)

•Learn to live with the constraints. There will be bad teachers, bad workload, but there’s only so much students can alter.

•Deadlines will never be postponed. Unlearn to procrastinate. Like that’s ever going to happen. Maybe I’ll start tomorrow.

•Forget social life. I know I’ve mentioned it above. But I can’t stress how important this point is. Whilst people go clubbing and drinking on various occasions, you’d definitely either be making sure that your draft of a door looks like the actual thing, or staring at the screen of your computer, and wonder at your reflection in it, what indeed you’re doing with your life.

1.34
Oh swell. It’s been 2 hours and I’ve been, drawing furniture,rather horribly, if I may add.
Maybe it’s time to sleep. I could work on it later, one part of my brain says, caring only for me.
Later? What later? You’ve got 7 hours left! Another says, the more rational side.
But the fact that its now 8.08 and my sheets are in the same stage, you can guess which side of my brain I went to bed with last night.
6.50
Groggily awaken to your mother’s wake up calls(yes you still live with her, you can’t afford to move out, with how expensive the course is) and get ready for the most important day of your semester.
Lets continue with some of the disadvantages of the course I mentioned above

•Expensiveness. You will need to buy t scales, technical pens, blah blah blah (See what I did there? No? Okay). Things unheard of. Expensive things. Wallet burning things.

•Sleep cycles. You won’t have one. You’re not an owl, neither are you human. The amount of sleep we don’t get should’ve killed us already(I’m serious, there’s a study to prove it).
Think of yourself as the twilight vampire cast (cringes at reference), unable to sleep.

I think I should’ve convinced you to think twice. I hope I have. I wouldn’t endow this torture on any soul.
But it does have positives, a minority, but they’re there.

•It’s fun. Which is true, it is fun. While engineering students are busy sleeping in their oh-so boring classes, you’ll be making shapes and models, learning how things you daily use operate.

•It’s artsy. Big advantage for me. For people who aren’t artistically oriented in the least (You can’t draw a stick figure)DO NOT THINK ABOUT JOINING. Or it’ll be like a really expensive arts course.

•You learn a lot. You’re made to learn aspects of engineering and beautifying them, interesting? Hell yes. Tedious? Wouldn’t say no.

•You will find company. No matter how different from you your classmates are, cribbing about the field will bring you together. I won’t promise unity though.

•You can travel the world. You’ll learn about how buildings were built in Ancient Greece and Rome. You can use this as an excuse to go see these places, if you can afford it. But I’m sure the classes you’ll learn about it in will excite you enough to plan a trip.

•Your exams can be studied the night before. I can vouch for this one. Having studied all the theory in 2hours. Also group studies would work.

•It gives you a lot of reasons to enjoy metal. The heaviest kind. I’m pretty sure after a year or two, you’ll make some of your own metal. (Cue : given up-Linkin Park)

•You’ll know your city better. Looking for places where you’ll find what you need fast and possibly as cheap as it can get, will make you slowly climb out of your cave (yes, you can call it that) and go to these unheard of places.

•People skills. Apart from actually being a subject(Because the student life makes you forget that there exists a population outside of your home and college), you’d be calling up a LOT of people. For internships, to locate shops, receiving calls from aspiring juniors, etcetera.

8.49
Oh god. It’s almost here. The panic is gone.
There’s a numbness, a sort of zombiness to me, eyes rimmed red from lack of sleep. There’s a silent prayer in the back of my mind. Asking that everything goes okay. That it’ll be fine, that my work will be enough.
Only time will tell.

Send in your articles to dudurudh.blog@gmail.com 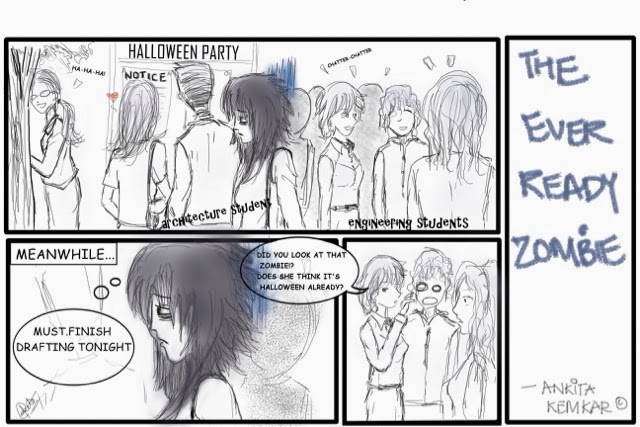