Skip to content
Fuel prices around the world are rising . That is a fact . That is how it should be . A precious natural resource that is running out will..actually HAS TO be costly . We can complain all we like , shout at the government , the oil company bosses or the TV news anchor trying to “bring the people’s voice to the government ” . None of them can do much about it ! Frankly , none of them should be able to anything about it becasue I for one am disgusted , shocked , annoyed , saddened and disappointed with inability of this so-called technologically advanced world to make  alternate sources of fuel available to everyone . Earthlings are SO reliant on fossil fuels today that people today are ready to upturn whole governments for “over-pricing” fuel . I have already spoken about this earlier so I’m not going to dwell on that too much . What I do want to dwell on today is the solution to this problem and the problem with the solution .
The easiest way out of this situation is not to car-pool . 10 years ago that was the most convinent option . 4 people in one car will make a difference but the situation is so bad today that , that will hardly change a thing . 30 people in one vehicle on the other hand can make a difference ! It’s not some new prototype developed by audi . It’s that humble monster known as a bus . 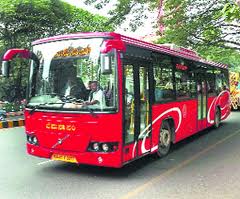 Public transport . THAT is the answer to our problem . If we all decided to travel by bus , we would not only not have to drive through the maddening traffic ( firstly  because the bus driver will do that and secondly because there will be fewer cars on the road so no traffic ! ) , we can also save on fuel and on maintainance !

Some hypocrites say that travelling by bus is inconvinient since the bus stops are rather far from their destinations . Two things I would like to mention here . Firstly , if more people used buses , the number of routes will increase and therefore the stops will get closer to where you want to go . Secondly , Whatever happened to that healthy habit we all had called walking ? Lost in time ? The world would be a healthier place if people decided to walk more often . Walking half a mile to the bus stop won’t kill you . Leave home 15 minutes earlier than usual , you’ll reach on time too .

I use the bus while going to college and have done so for about 3 years now . It’s convinient , cheap ,safe and gives me that sense of satisfaction of having saved that little much of the world .

Having said that , there is a problem to this solution . And that is  upto the government to rectify . Our buses are old , dilapidated , leaky and give out more smoke than a crowd of italian mafia bosses smoking . That needs to change . You need to make buses attractive. Make people want to travel in buses . Phase out the buses that have run longer than  my generation of homo-sapiens has been alive . Service the buses regularly and make sure they stick to the pollution control norms . Publicise public transport . A group of shutter-happy ministers travelling in a volvo bus once a month is not publicity . Calling that sad event as bus day is not publicity either . Publicity comes when your buses look good and run on the roads efficiently . Publicity comes when these buses don’t jump signals and have smart well dressed drivers and conductors. Publicity comes when people say “I dont need to spend 4000Rs on petrol for my car every month when I can use a bus for hardly 1/40th of that amount per month . Publicity comes when these buses have a fixed schedule that does not change every 10 days and which is available for everyone to access easily , say at bus stops , or through phone alerts on request or on the internet . Publicity will only come when you make using public transport uncomplicated . That is the advertising needed .
The volvo bus fleet is the best example of a brilliant public transport system that is poorly advertised and hence runs empty for most of the day . If more people are made aware of the exact timings of these buses , more people will use them ! These buses do infact stick to a schedule . Only problem is that, to know what this schedule is , you need to observe for about a week and make a note of when it actually  comes to your stop . I really appreciate the software-engineer crowd working at big business parks and tech-parks here . I see so many of them go to work in these volvos and comeback home in volvos too . If only more people would do the same !

A good example of badly maintained buses are the older model buses that are running . One drizzle and the water will leak from windows , the roof , a hole in the floor , through the gap near the gear box and from other places you did not know existed in the bus ! These buses leave a smokescreen behind them too . They look rickety , frail , brittle and ready to fall apart . Nobody wants to uses buses like that ! 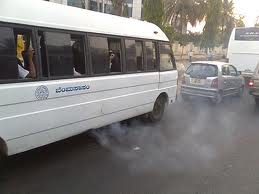 That is where the government needs to step in . Revamp the public transport system . Update it’s website often ( Yes BMTC has a website . http://www.bmtcinfo.com/site/index.jsp ) , buy new buses , phase out the old ones ,make people want to use buses !

I keep coming back to that phrase . Make people want use buses . But for that people should have it in their heads , their conscience to uses public transport . If that will power is not there , this is a campaign not worth starting . We need to promise ourselves that we will not discard the option of public transport without even giving it a chance , maybe two . Trust me , the volvo buses are comfy and on time . Give it a try for a week . Lets do our bit first and then tell the government the problems WE faced . Don’t dissuade yourself or others by listening to or telling other people’s bad bus-ride experiences  . Find your own problems and try to get it solved . Saving the environment is not just a subject in a text book . It’s something we have to do . It’s a fate we have brought upon ourselves by irrational usage and unthoughtful wastage . Set it right . Do your bit . Fuel prices are bound to increase . You can’t do anything about it . You can do something about this though . So just do it .