Skip to content
Roman Abromovich bought chelsea football club 8 years ago. Since then , we have had 8 different managers . 6 managers in the last four years . The lastest of them being Andre Villas-Boas . Jose Mourinho and Carlo Ancelotti  have been the most successful of them all.Meanwhile mr RA , like a rich kid adamant for the finest chocolate cake , has been behind the Champions league trophy all these years.And like the child would do if he did not
get it , he fired his chef and brought in a new one .
Why has this not worked with chelsea? The reason is simple .
Chelsea’s has been one of those squads that has had a constant solid core , comprising Frank Lampard,John Terry , Didier Drogba and Petr Cech . Everyone else formed the rest of the team around them . This has not been particularly unhelpful . Just that it always left us “that close” to the top spot but never got us there. It worked beautifully in the first few years when Jose was incharge. We won the Premier league twice and many other titles but the champions league did not come. That led to an understanding that this team is good enough to get there but it just needs two or three big names to boost it’s chances .  And RA opened up his purse from time to time for that . The shevchenkos and the Torres’ and others of the kind are examples of that . 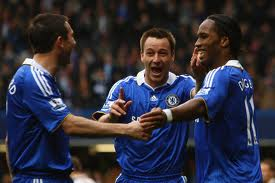 But what RA and the managers coming in have to understand is that the core is not as strong as it was earlier . No disrespect to Lampard ( who is my all time favourite player ! ) or any of the others but powering the team for 8 years is a big task that they have done very well and it is very obvious that it’s not going to be that way forever . It’s about time we recreated that core with younger players whilst lampard and terry and the likes are still around to give them a helping hand .
But with a change in manager comes a change in thinking and when you think too much , the problem becomes bigger. It’s simple case of new managers being unprepared to change a system that has worked pretty well .
But the arrival of Andre Villas Boas gives me hope . He is not new to English Football having worked right here at chelsea as head scout under jose mourinho , but has little experience as a full time coach and if he is anything like his mentor( Jose Mourinho ) , could’nt care less about the historical value of players at the club and (the various ) playing styles of the club .
No sarcasm there . It is time someone like that came to Stamford Bridge . Someone who is not bogged down by clichés and old school thought . Carlo was great . But even he , in his second season did not make the radical changes that ought to have been made especially after we lost the likes of Ballack and Joe cole . If we had seen CA around for another season , he probably would have made those changes but there is no point crying over spilt milk !
A 33 year old enthusiastic manager can make the difference if you ask me. If he is anything like what I have heard of him , we will see a dramatic shift from the traditional chelsea teams to a more sophisticated chelsea team with a lot of young blood and a hell lot of importance to the attack .
We have to adapt to life without Drogba and Lampard some time in the future .  Now is a good time to start the process of building a team that is not dependent on the seniors ,that can be carried forward by the youngsters and yet will be more lethal than previous teams . I certainly hope AVB can bring that . It’s a ray of hope that comes with every new manager but ,at the cost of putting more pressure on the new manager , I feel that ray is brighter than ever today !

With the hope that Andre Villas-Boas heralds the coming of a long, successful , title-winning period in chelsea’s history , I shall sign off and go in search of more chocolate cakes myself ! Untill next time , ciao , stay safe !!