Skip to content
India is one Huge country . We are a country of argumentative indians . Everyone has an opinion on everything . And because of that argumentativeness , what finally comes out of a debate in this country is generally the right choice .
We have an imperfect , yet beautiful democracy . We elect our representatives who make laws for us and who run the country on a daily basis . We gave them certain privileges because running a country of 1.2 billion is not an easy task . They come back to us (atleast) every 5 years to seek our permission to carry on in office . We have the choice of giving them that permission or denying them that permisson .

We have a constitution .  It is the longest written constitution of any sovereign country in the world, containing 450  articles in 24 parts, 12 schedules and 96 amendments, for a total of 117,369 words in the English language version. Our constitution gave us ,among other things , the right to freedom of speech and expression and that to protest against something we don’t like . It gave us certain duties to perform for the betterment of the nation as a whole and consequently for our own welfare . These duties are mere moral obligations , not legally enforceable . Which means , even if you didn’t do any of them , no one can take you to court . That is the beauty of our constitution . It gives us all our rights and leaves it to you whether or not you want to do something in return for the country .

We have a system of parliamentary demcracy . We set up a loksabha and a rajya sabha . Our Loksabha and our Rajya sabha . Inside , our representatives debate laws , amend laws , make laws and basically run our country for us . Contrary to popular belief , chair hurling and abuse exchanging is not what happens inside parliament . The proceedings in parliament are telecast live on Loksabha TV so that people know what is happening inside the walls of parliament . Nowhere else in the world is such a facility available for citizens . The debates that happen are of high quality , of substance , of grit and determination to get the best possible solution to whatever the subject . The critics will call all debates politically motivated and biased,  but , if out of that political motivation something good comes out , is it bad ?

There are corrupt politicians . True . But there are those who genuinely concerned for the nation and who are doing great work . How did the corrupt ones get there ? Somebody voted for them . Somebody gave them the numbers to get there . I hear SO much talk about money power winning elections . Ask yourselves one question . When these corrupt people bribe voters into voting for them , shouldn’t the voter reject the bribe and vote for the right person ? Isn’t that bribery ? If the voter took a bribe , shouldn’t he go to jail for it ? That voter is as guilty as the passport office clerk who wants money to clear your file . Infact more so because the passport clerk asking for a bribe is harrassing only one person , the voter’s vote on the other hand ,sends that candidate to parliament , where he will then decide the nation’s future .

Corruption is a menace . Think about it . If you were patient enough , better still if everyone was patient enough , can we get our work done in a government office without paying a bribe ? The reason you paid a bribe was because you felt , in your wisdom , that too much time was being taken to get a simple file passed . Say we were all patient enough . How long will they hold your file ? How long will they hold all our files ? If you showed up everyday at that office and waited patiently for your turn , eventually it will get done . If everyone did that , it would become the norm . Overtime , the waiting time will reduce once the clerk realises that no matter how long he made everyone wait , NO ONE will pay him a bribe . But those words are crucial . No one should pay a bribe . The Gandhian way of protest is not hiring a posh Mumbai ground for 7lakh rupees and making a 74 year old man fast for 3 days . The heart of the Gandhian way of protest was non-violence and patience . That virtue called patience is the most rarely found trait in people nowadays . 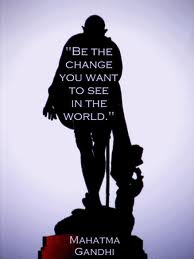 ” Be the change you want to see in the world ” . It’s the most important message the father of our nation left us . Try getting some work done without paying a bribe . It’s not easy . It’s a struggle . But that is what our fight is against . The sense of satisfaction you get when you know that you did not pay a bribe is extraordinary !

The point of this post is simple . The current system is bad , probably rotten , destroyed ,mutilated . The easy way out is to run away from it and call for a “participatory democracy “and what not. But what we must do is to make the system work . Force it to work . Clean up the system . Years of corrosion has made the system the way it is today . No one ever said that this fight against corruption was going to be easy . It is going to be a struggle but if 1.2 billion join hands , nothing is impossible .
The lokpal bill will be a useful tool in this fight . But let us not make it our trump card . Lets us not overestimate the lokpal and understate our own roles in the process .

We must be thankful for the democracy we have , for the constitution we have ,for the rights we have, for the freedoms we enjoy .At the same time, we must be aware of  the duties and the responsibilties  that come with that . Let us not be naive and think of the lokpal as the game-changer or think of a group of 5 people to be the agents of change . 1,180,274,332 proud indians are the agents of change . 1,180,274,332 are the ones who will make a difference . That is our trump card . The power of the indian people . That inherently indian trait of a strong will power to make a change , that single-minded determination that brought the british empire to it’s knees . That is our trump card . That should be our trump card !